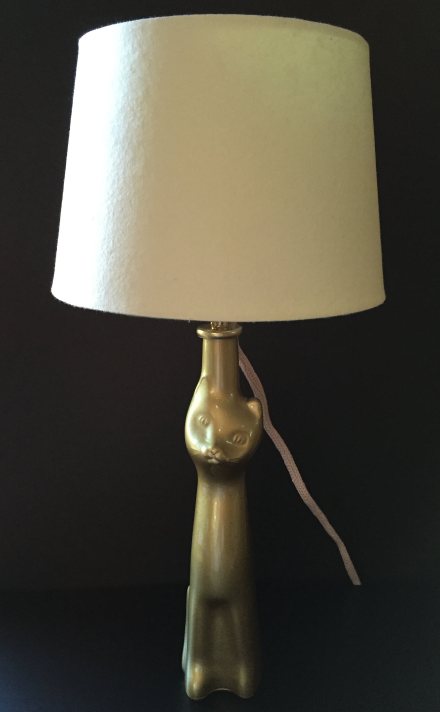 Would you believe that this lamp started life as a wine bottle? It looks so expensive, like it might have come from San Francisco’s Gumps or something. But it really is a wine bottle for a German Riesling from Moselland that I purchased at Cost Plus World Market. 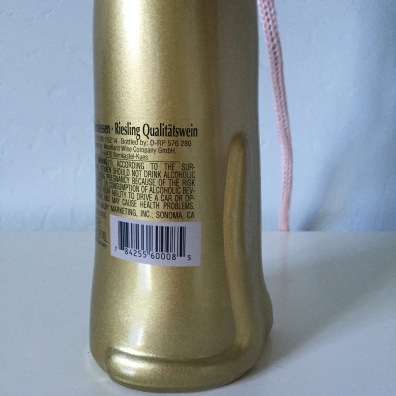 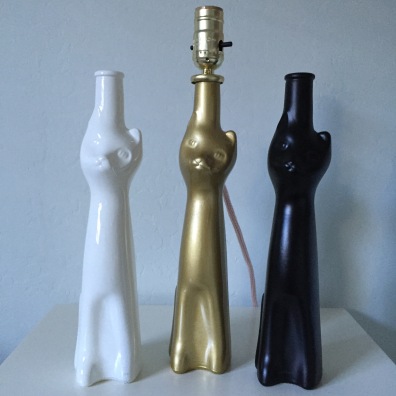 I’ve collected a few of these bottles in different colors over the last few years. Aren’t they wonderful? They’re just the right shape for a lamp base. And did you notice that the cat even has a tail? Click here for a great photo of some other colors and the story behind the bottle. 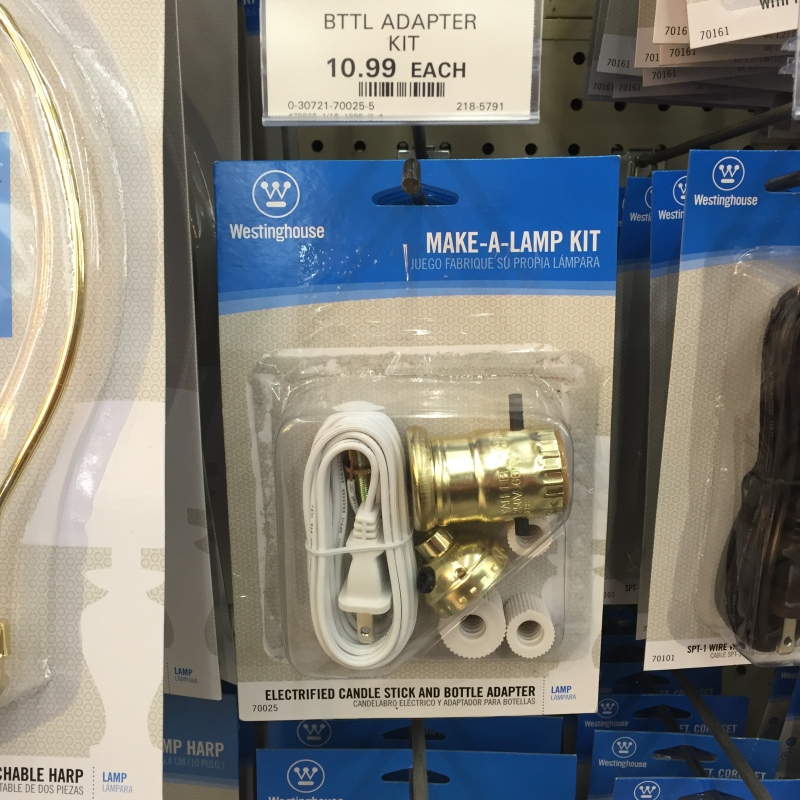 This “make-a-lamp kit” is what you need to turn this or any other bottle into a lamp. Look for the lamp parts section at your local hardware store and you’ll likely find it there. Besides that all you need are a shade and a light bulb and maybe a couple of other things I’ll tell you about below. 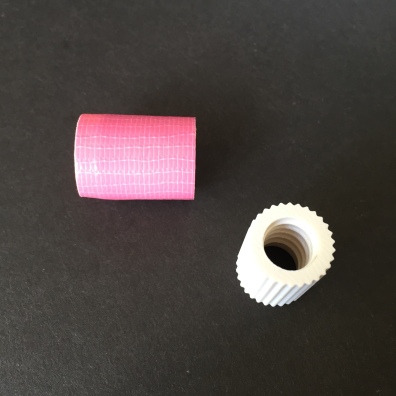 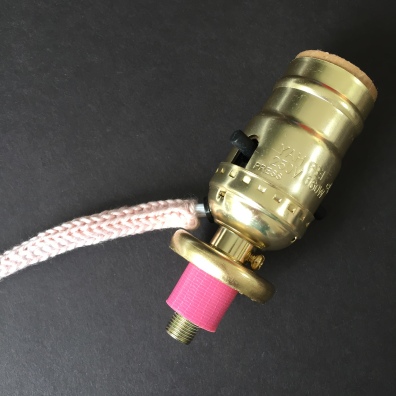 All of the parts shown above (except for the cord cover and duct tape covering the bottle opening adapter) come in the kit along with instructions for how to put them together. There are three adapters in the kit; you choose the one that most closely fits the neck of your bottle. My best fit wasn’t quite big enough so I put a layer of duct tape around the adapter to make the candle stick sit more snugly on the bottle. It’s not glued together or anything, so a snug fit is important. 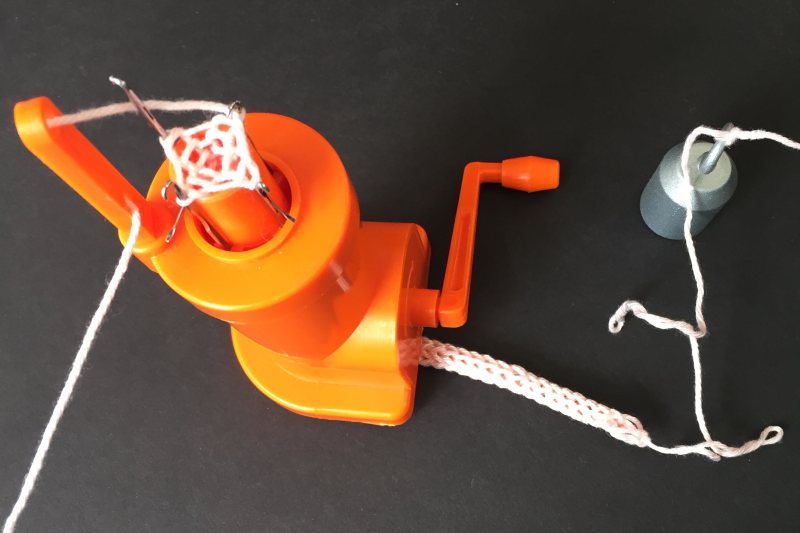 The cord cover is optional of course. There is nothing wrong with leaving your cord as is. Do you know what the wiring of a lamp like this (where the cord comes out of the socket cap) is called? It’s called French wiring. I learned that when I worked in the interior design business. French wiring, French knitting, French fries, I don’t know where the French part comes in, but it certainly doesn’t hurt. The first time I saw a lamp wired like this I thought it odd, but when I learned the term for it I figured if it was good enough for the French it was good enough for me. And it makes it so much easier to make a lamp.

But back to the cover option. I’m always looking for ways to use a bit of spool knitting so I turned to my special French knitting machine (you can read about that here) to whip up a cord cover in no time. If you plan to cover your cord with a tube be sure to do it before you put the candle stick together because I don’t know how to get those socket parts apart again after you snap them together. I wrapped some masking tape around the exposed end of my wire and slowly worked it through the length of my knitted tube (about 30″). It adds a little je ne sais quoi, don’t you think? 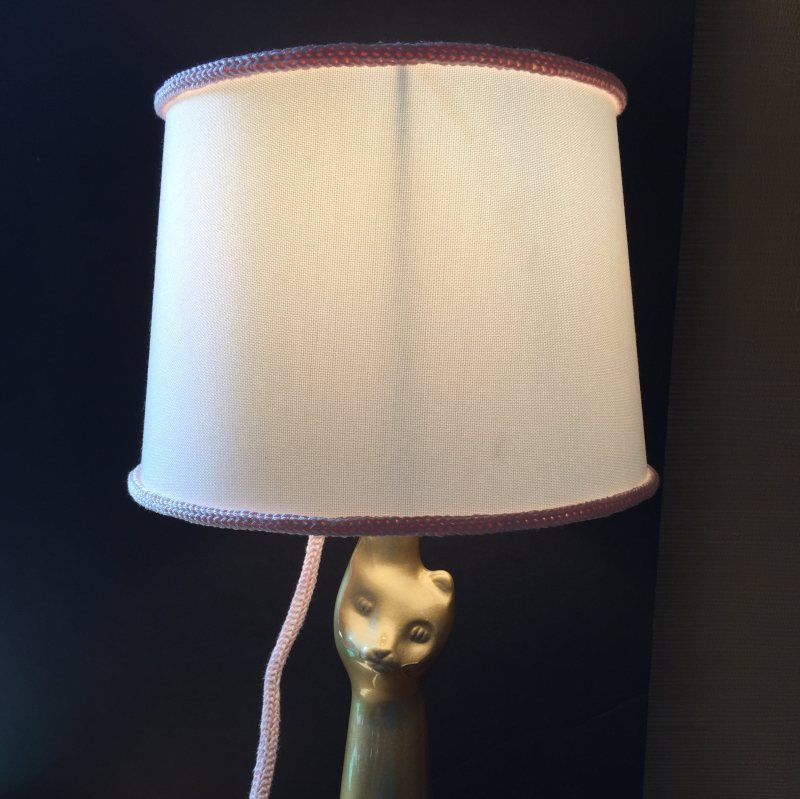 I even experimented with making some trim from the same cord. In case you’re curious I used Patons Grace in Blush to make the cord. In the end I decided that a golden cat didn’t need additional embellishment and that I liked a paper shade I purchased at Cost Plus World Market better than the white linen one I purchased at Target. For those of you keeping track that’s one extra shade that I bought and one extra lamp kit – live and learn. 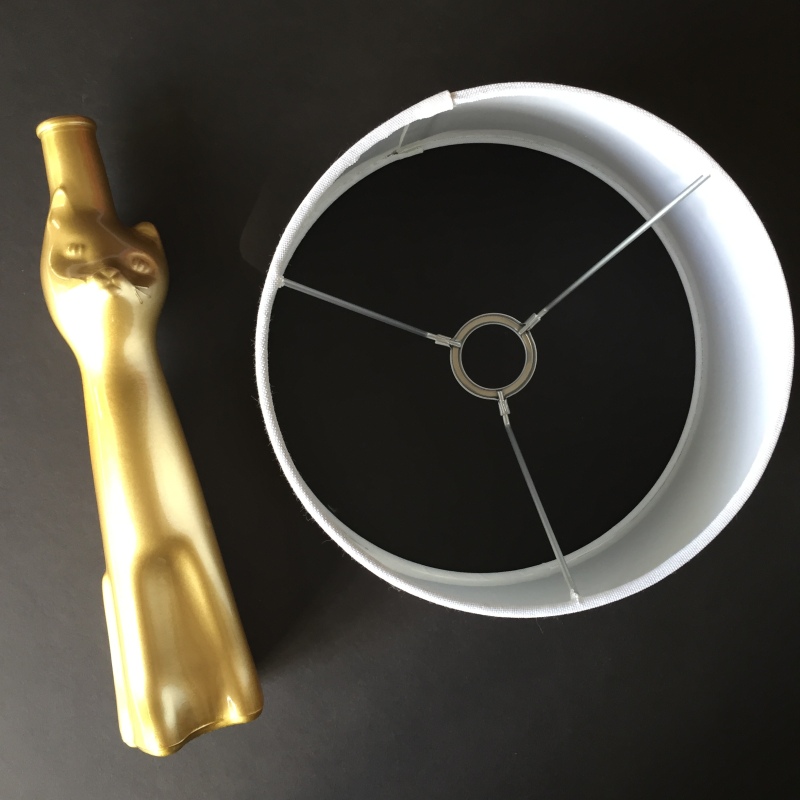 Let’s talk about those lamp shades for a moment. Most of the smaller lamp shades that you’ll find in your local shops these days have what you call slip uno fittings. The ring you see on the shade in the photo above slips over the socket and is held in place when you screw in the light bulb. You can use a shade that has what’s called a spider fitting (works with a harp) on the socket that comes in the kit, but you’ll need to buy an extra part to slip over the socket that will hold the harp. One thing I found with this project is that the Target slip uno shade fit on the socket in the kit I used while the Cost Plus shade didn’t. The ring on that shade was larger, obviously meant for a different socket. But luckily, on a visit to Home Depot, a kind older gentleman working in the hardware aisle asked if he could help me. I debated whether I should even bother telling him what I was looking for, but I did. In the end, he didn’t have anything in the hardware aisle that could help me, but he did give me a suggestion. He said to try the plumbing aisle.

What I wanted him to do was to take me by the hand over to plumbing and help me find something that would make my Cost Plus shade work on my socket, but I don’t think he was allowed to leave the hardware aisle. So I struck out on my own (with Samantha beside me) and darned if I didn’t find just the right thing(s). I wanted to go back over and tell that nice man, but just then my husband showed up carrying some 8′ long pieces of wood that I was sure he was going to hit someone with and I figured we should clear out of Home Depot as quickly as possible. But there’s a lesson in this. If there is something you want to do and you’re not sure how, you better tell people about it and ask for their help even if you can’t imagine they could possibly help you. They might not have the answer, but they might point you in the right direction and sometimes that’s all you need. 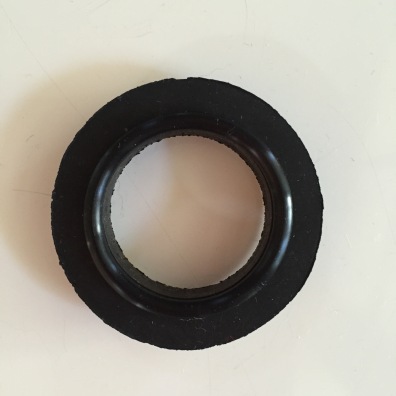 I found my answer in something called a basin mack gasket that I turned over so the flat side faced up. Then I glued a an o-ring from an assortment package to it and that solved my problem. Wonder of wonders, miracle of miracles. 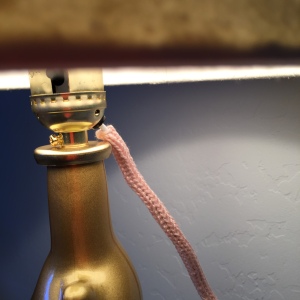