This is what got me into the enchanted May Day celebration I wrote about in my last post – my agreeing to create a maypole for a festival at Samantha’s school that happened on May Day this year. As I was talking with the festival’s organizer about my love of maypoles and all things May Day, I found out that her husband was a former kindergarten student of the hostess of the May Day celebration and one thing lead to another and before you know it I was invited to attend this year’s event.

My love of the maypole stems from kindergarten. Unfortunately, I suffered from abandonment issues something awful that year. (I recently read that as very young children, we all struggle with either abandonment or confinement issues to some degree. Do you think that’s true? And if so, which one were you?) I’ve often wondered where it came from. I never suspected my mother could have had anything to do with it, but she did have a lot on her mind managing five kids (the three boys in particular) and maybe I did sense a little distraction there.

One of our favorite family stories came from that time period. My mom liked to defrost meat on the hood of her red Ford Falcon station wagon. Of course, we didn’t have all the safety guidelines then that we do now, so she may not have been the only person to use this technique and luckily, it didn’t seem to do us any harm. But one day she forgot or didn’t notice that she had two frozen chickens defrosting on the hood when she went to pick up my sister and brothers at school. So here they are waiting for her and she drives up with two chickens on the car. Then when she realizes what she’s done, she gets out and acts like it was the most natural thing in the world for her to be collecting those chickens from her hood while picking her children up from school. I can’t tell you how many times we laughed over that.

And something else happened that year. Though I didn’t attend the same school as the other kids, I did get in on their school picture program. But my brothers brought home pictures of some other little girl that they thought was me. Looking back now, I don’t think it was so crazy for me to have thought that these people (aka my family) might easily have forgotten me, misplaced me, or even mistaken me for someone else.

So kindergarten was rough on me and I’d get my nervous stomach all worked up and there was a lot of throwing up involved. But on the last day of school or very close to it, there was a maypole. And I danced and skipped and reveled in the fact that I would never be coming back to that school again and well, maybe it hadn’t all been so bad and regardless, life was about to get a lot better. I guess I was elated because at long last I was free – free of kindergarten. How could I not love the maypole?

The first thing you’ll need is a big roll of white crepe paper streamer. I used clear duct tape to secure the paper at the bottom of the pole and started wrapping it, overlapping as I went along. Rather than trying to use one long piece of streamer all the way up the pole, I found it easier to wrap using a number of long pieces that I taped together, overlapping the joins with the next piece of streamer. I left about a foot at the top of the pole free of paper. Then I slipped on a knit sleeve made with a stick loom that I would later pull up and use to cover the base of my ribbons. But don’t worry, you don’t need a knit sleeve. 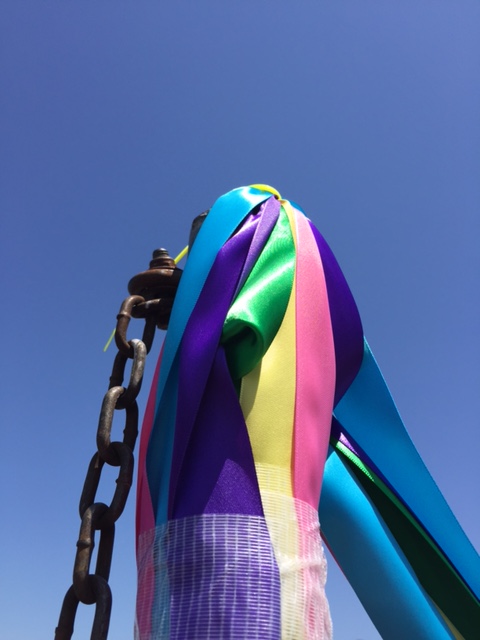 Do you see the chain hanging off the side of the top of the pole? I ended up bundling it together and securing it with a zip tie. It needs to be out-of-the-way of your ribbons. What you see here are twelve ribbons secured to the top of the pole (I bundled the chain above the top of that tape line) with duct tape. I wasn’t sure this would be secure enough, but it worked great. The ribbons are upside down and their cut edge is just out of the picture frame. I taped them on one at a time. I had two 12 ft. lengths of each color and taped one of each opposite each other on the pole. Then I secured the ribbons on top of the pole with a zip tie so I could wrap some more duct tape around all the ribbons. Next I pulled up my knit sleeve and released the ribbons from their zip tie. In place of the sleeve you can continue wrapping crepe paper up to the top of your tape line or maybe even use white duct tape. Don’t release the ribbons until you’ve finished this step.

Finally, I added four flowers that I made from tissue paper and bundled together with pipe cleaners to the very top of the pole with some sticky stuff. Done.

I wish I had more pictures of larger groups of kids dancing around the pole. We had about three large groups while I was there, but I danced with them, so I couldn’t take a photo. But there’s nothing wrong with a small group simply running the ribbons around the pole like these two kids. I wouldn’t say that any of the kids that partook of the maypole found the same high in it that I did all those years ago, but I was happy to introduce them to the custom. Many of them had no idea what a maypole was.

This is a sign I made to go along with the pole.

If you decide to do this, you might want to limit yourself to just two alternating colors of ribbon. Most dances require every other dancer to do something different. I had kids stand on colored chalk marks of 1 or 2, but it would have been even easier to say “green goes this way” or “yellow goes that way”. The Single Braid was a difficult dance for the kids to do, but they were quite engaged in untangling their “weave”. I recommend Barber’s Pole for young dancers because it’s a lot easier. I was near a speaker playing music for the main part of our school festival, so I didn’t use dedicated music. But it would have been more fun if I had. I downloaded a jazzy version of London Bridge, the Chicken Dance Polka, and Lunchmoney Lewis’ Bills among a few other songs.