Q:  What do you get when you join a short band you’ve crocheted to a button you’ve crocheted?  A:  A ring.  And not a bad-looking one at that.  This little project is the marriage of two inspiring items that I found on a recent trip to Uncommon Threads in Los Altos.  One item is this Bergere de France pattern magazine (Accessories Gallery) and the other is the Habu Textiles silk-wrapped silk yarn I mentioned a few posts ago (though I believed it to be a silk-wrapped cotton at the time).

Do you know Bergere de France?  One of the things that I love about Uncommon Threads is that they carry a nice selection of Bergere de France pattern collections (as well as the gorgeous Rowan magazines); I don’t believe the other local shops carry this line.  Bergere de France has the chicest knitting patterns I’ve ever seen (of course – they are French)  If you want to see for yourself, just look at this and tell me if you’ve ever seen a better-looking poncho.  They also offer pattern collections for simple, basic knitted garments that can be so hard to find.  Take a look at some of the other items from their accessories collection (both knit and crochet projects) … 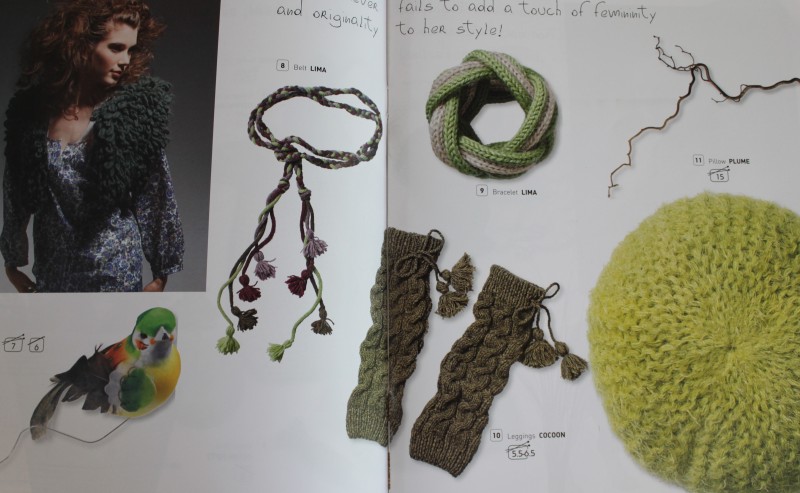 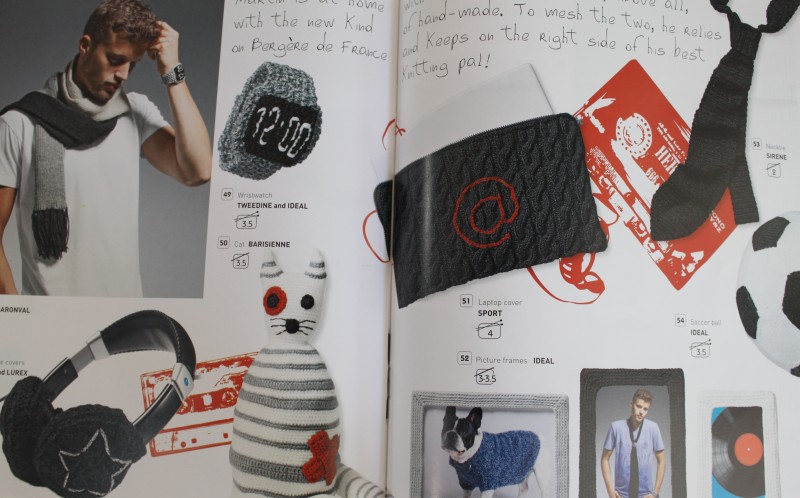 Look at those picture frames.  If you said “crochet picture frames” to me I’d think, “how perfectly horrid”, but I really like these.  There are so many fun projects in this collection – even a cover for a plaster cast. Keep in mind that you do need to be somewhat careful when you use patterns that were not originally written for the U.S. market.  It wasn’t until after I’d pretty much abandoned the simple ring instructions in the magazine that I discovered another page that explained that in France, double crochet means what we think of as single crochet in the U.S.  But even that didn’t account for the problems I was having.  I began to get frustrated until I thought about the components of what I was trying to make.  I’d seen crochet buttons before, but I’d never made one.  I knew that I was basically crocheting a button and all I needed to do was to attach a band to the button to make a ring, so I started searching for crochet button videos online and I found this one.  It’s pretty good, but there’s a part in the beginning that I just can’t quite make out.  So I’ll just tell you how I did it.  Even if you don’t want to make a ring, this yarn makes a stunning button that would be beautiful on a coat for one thing.

I used a size F crochet hook because it was the smallest one I had.  I created a ring using a loop.  You can see this in the video referenced above, but again I missed the initial move, so I began by placing a slip knot on my hook and then making 6 single crochets into the loop.  Using a loop, as opposed to creating a circle with a chain, is the way to go because you can close your ring up tight with no hole left in the center of your circle.  That’s typically what you want with a button.  I pulled on my yarn (gently) to close up my ring.  On my next round, I made two single crochets into each of the 6 stitches from the previous round (12 single crochets).  Then I made three more rounds with one single crochet in each of the single crochets from the previous rounds.  What happens when you don’t increase the number of stitches on a round is, your crochet simply folds over on itsself.  And most amazingly the size of my ring got smaller as I made more rounds.  This was kind of like magic the way it worked out; usually you would gather your last round like in the video or you might decrease your round as in my original pattern instructions.  Anyway, the button was essentially done after that.  All that was left to do was to make several stitches to secure both tails of yarn.  The band was made by chaining three and making rows of one chain and one single crochet.  I stitched either end of the band to the underside of the button and the ring was made.

As it happens, Uncommon Threads is hosting a Bergere de France Trunk Show this weekend.  Their Aperitif showing is going on as I type this, but if you’re local you’ve still got an opportunity to attend the 4 Heures (4 o’clock snack) showing on Sunday, May 13, from 3 – 5 pm.