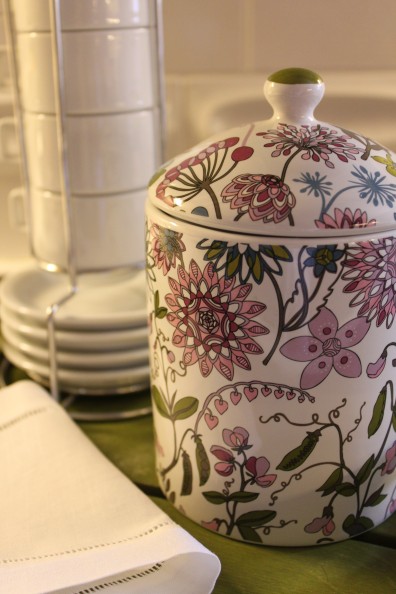 I am going a little crazy with this Liberty of London for Target thing. I’ve always thought of the lovely English Liberty fabric collection as one of the finer things in life, so I wasn’t sure how I felt when I saw they were coming to Target. But you know those Target marketing people and their design sensibilities – I had to succumb. The canister above was purchased for me by a friend in a not-even-neighboring city after she called me from her cell phone and told me she was headed to Target. I couldn’t find it at any of my local Targets – would they have it at hers? Yes! The girl’s top was purchased at my very own Target before the promotion was even set to begin. Did you notice that both products have the same pattern? It has a certain Scandinavian appeal for me. I’m really happy with both purchases and sorry to report that they were not the only ones I made. Several lacquered picture frames and miscellaneous other items also found their way into my shopping cart.

Liberty (the actual store in London!)

What’s most amazing about Liberty of London for me is that I’ve actually been there! This photo was taken just last summer during a trip to England that included three full days in London. There is a lot to do and see in London with a husband and young child, so I only spent about 20 minutes there, but I dream of going back and having tea and wandering for hours in that wonderful place.

I’ll leave off with a photo I took at the Fashion and Textile Museum on Bermondsey Street in London which is where we stayed. They were doing a show on the evolution of underwear, so here we have three panties done up in Liberty fabrics. I only remembered these when I was looking at the Liberty thongs (yes, thongs!) they are selling at Target. The thongs did not end up in my cart, but these would have. They would be a fun thing to sew up for a young girl.